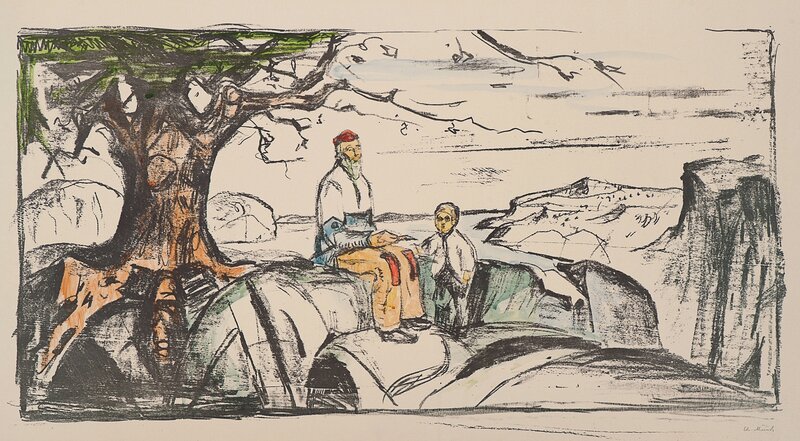 History and Alma Mater are main subjects in the decorations of Kristiania University Festival Hall, the decorations for which Edvard Munch won the competition in 1909-10. The paintings were in place by 1916, History on the Hall’s west wall, Alma Mater on the east wall, they are large, 429 by 1135 cm.

Edvard Munch early had the idea of showing “History” as a large oak-tree with an old, wise man sitting under it. The model for the old man was Børre Eriksen (1829-?), a sailor and dock-worker, worn from hard work during a life-time, whom Munch met while living in Skrubben in Kragerø.
In a note Munch writes about «the wonderful model Børre», who inspired him for the work. (MM N 48, munch.no).

Many have seen him as a blind Homer, as the old wise-man who tells the story to a younger generation. Børre has a monumental form as he sits talking to the boy standing at his feet, listening attentively. The model for the boy was Erik Johan Krafft (1905-1999), a grand-child of Stina Krafft, Munch’s maid at Skrubben.
Even though Munch may be did not think of the old man as blind, more as a one who sees pictures for his inner eye, the allusion to Homer is not so far off, for there was a point in connection to the decorations that they were to be included in a building in classical style, which pointed to Classical Greek Antiquity and the pillars of western society. The lines of history could be drawn to the beginning of our time, along with our society’s oral tradition of story-telling. The old man, as a distinct Norwegian character with his red cap and simple clothing, also fitted in nicely as a symbol for the Norwegian nation, such a short time after independence in 1905.