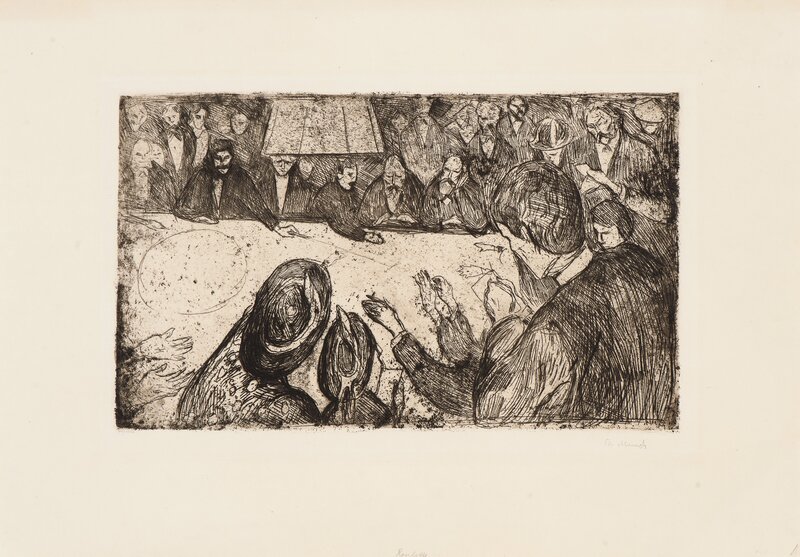 In all Munch painted three pictures with motifs from the casino at Monte Carlo, where he was a frequent visitor during his stay on the Riviera in the winter of 1891-92. Woll 2008, p. 245.

Dostoyevsky’s novel The Gambler of 1866, was published in Norwegian in 1889.

All the same, the distance between love and gambling is not so very great. Indeed, this is one of the themes of Dostoyevsky’s “The Gambler”. Like love, gambling can also rule people’s lives. This is made very clear in both Munch’s texts and the motifs from the casino. The moment that can change the course of your life becomes very real at the roulette wheel. As the ball lands you may have won a fortune or lost everything. But even if you win, have you not lost all the same?

In her article on Munch’s roulette paintings, Allison Morehead writes: “Demonstrating Munch’s concerted efforts to depict what he understood to be the complex psycho-pathology of betting on chance, the roulette paintings reveal the artist’s search, on the eve of his avant-garde success in Berlin, for a properly symbolist method to convey the singular experience of madness in Monte Carlo”. Morehead’s view sums up an important moment – the roulette motif in Munch’s art represents the start of a new period, in which the formal language of his paintings is adapted to a new type of theme: The irrational in people. In the rooms of the casino, urges, dreams, and emotions were competing against more or less rational gambling systems and in Munch’s pictures, rationality and the gambling systems are the losers. Thue, p. 119-123.