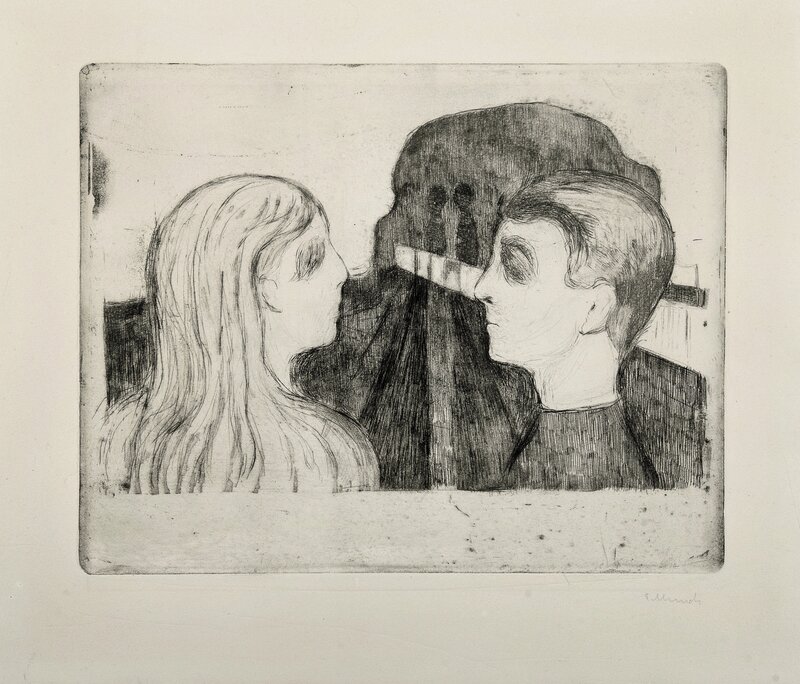 The group of graphic art that has been given the name “Attraction” includes not less than four variants; two etchings from 1895 and two lithographs from the year thereafter. In all the four versions we see in the foreground the profile of a man’s and a woman’s head facing each other. The eyes are marked, big and hollow, and it seems as though their gaze is sucked to each other. In three of the prints (two etchings and one lithograph) the background is formed by the big group of lime trees by the Kiøsterud House and its white picket fence. The undulating shoreline glides unmarked into the group of trees’ swaying, feminine lines contrasted by the masculine expression of the white picket fence. In this way Munch constructs a psychic charged room where the couple represents the sexual pull as a force of nature, as well as nature itself becoming a symbol of the couple’s attraction to each other. P. 75.

The shadows are probably formed by the lights from the windows of The Grand Hotel at Åsgårdsstrand, which was situated just north of the Kiøsterud House, and where a ball was held for the young ones.

The perception of the shadows is not mentioned in any of the many literary notes that relate to this subject. The shadow as a means of expression, Munch, by the way, used already in the 80-ties, but the form as we see it in “Attraction”, probably stems from new-romantic movements in art and literature at the time. Amongst other things, Munch might have been inspired both in form and atmosphere by a section in Maurice Maeterlinck’s play “Pelléas et Mélisande”, here quoted from Johannes Jørgensen’s translation in Samtiden, January 1893:
“Mélisande: How the shadows are big this evening…
Pelléas: They are intertwined through the whole garden …Ooh, they are kissing each other way yonder … Look! Look!”. P. 76-79.