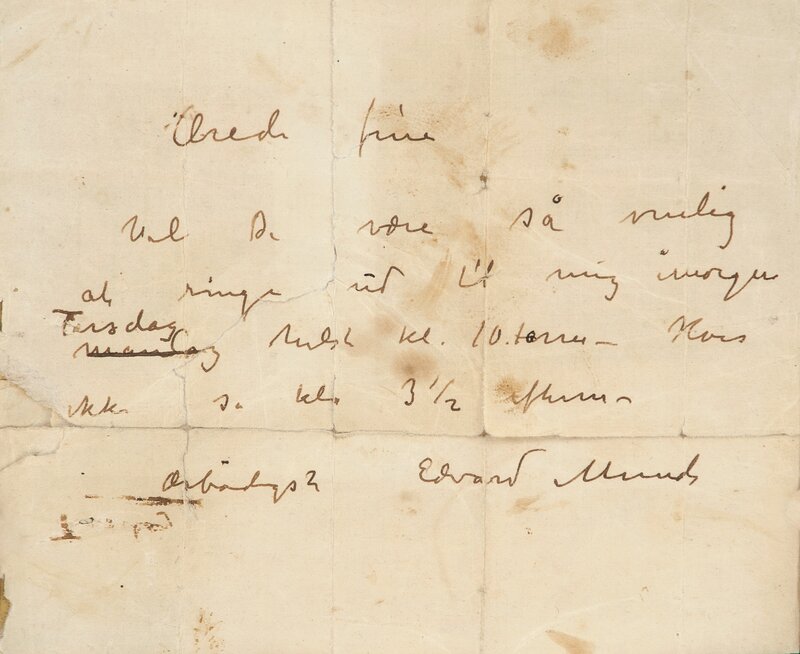 Registered in the Munchmuseum under “Hanna Brieschke”: “In private ownership, PN 816. Letter, not dated. (The text is not yet available.)”, see digital archive on Edvard Munch’s texts: eMunch.no.

The text of the letter:

Provenance: The letter has been in Hanna Brieschke's family's posession from the time it was sent to her by Edvard Munch.

Hanna, who has been called «Nordlandspiken», (the Girl from up North), modeled for Munch in the years 1932-42. She was a married “Lady” from 1933, consequently the letter may be dated from between 1933 and 1942. In an article in The Munch Museum it’s made clear that she in 1942, when she posed for Munch for the last time, was married and had a daughter. (This particular information has been given to us by Magne Bruteig).

The letter is addressed to Hanna, née Selquist (1911-1996). Hanna was married in 1933 to Leonard Olsen and had a daughter, called Evy 01.01.1934. She probably stayed married to him until the beginning of the 1940s, or perhaps not even that long, as Evy lived with her father a lot of the time when she was little. It was not very common for a husband to allow his wife to pose as a model, which included being nude, so that the marriage was a short one, is probable, as she actually modelled for Munch at the time. There are no pictures of her being pregnant, so it may well be that she had a break from modeling during her pregnancy and confinement. Hanna had made contact with Munch via another one of Munch’s models, Birgit Prestøe, who posed as a model for him from 1924 to 1931. Birgit also modeled for the amateur painter, the doctor, Odd Nyquist, and Hanna got to know these two people, and Birgit had suggested to her that she ought to make contact with Edvard Munch. There is a statement from Hanna that she posed for Munch in Åsgårdstrand in the summer of 1932. We have had the information from Hanna’s descendants that she took a job at the doctor’s, probably after the break with her husband, and that she by then again had the possibility to make contact with Edvard Munch.

Her daughter Evy also was a model when she was little. She was a photomodel or childmodel in various publications and newspapers. Evy first married Per Nordlie and had two children by him, the daughter Mona, born in 1957 and the son Eddie, born in 1958. Even Mona worked as a model when she was young, at The Academy of Art in Oslo. Working as a model has been a way of life in this family for three generations! Evy was divorced in 1963 and met Tor Skaarud the same year, with whom she had two daughters, Anne and Katja. In 1964 Tor got a job in Sweden and the family moved there. Evy divorced Tor in 1975 and has since lived alone.

Her mother, Hanna, got married to Paul Brieschke. They had a son, Paul, in 1950, who, by the way, tragically died in an accident at the factory where he worked. Their son, Paul, had two children by Greta Monsen, who came from Lofoten. She was four month pregnant with their second child, when Paul died.

Hanna probably originally came from Senja and bought, or had built, a house up there. During her marriage to Leonard Olsen, she lived regularly in Oslo. She got a job as a model at The Academy of Art in Oslo and bought an apartment in town. She started living in Senja during summer and in Oslo during winter. She was attached to the place up north all her life, but her house burnt down to the ground long before she died, and many papers and photographs were burnt along with it. Later she modelled for Hans Normann Dahl and Dag Thoresen. Dahl is supposed to have helped her to find a place at an old people’s home in Oslo, as she did not want to stay in Northern-Norway as an old lady.