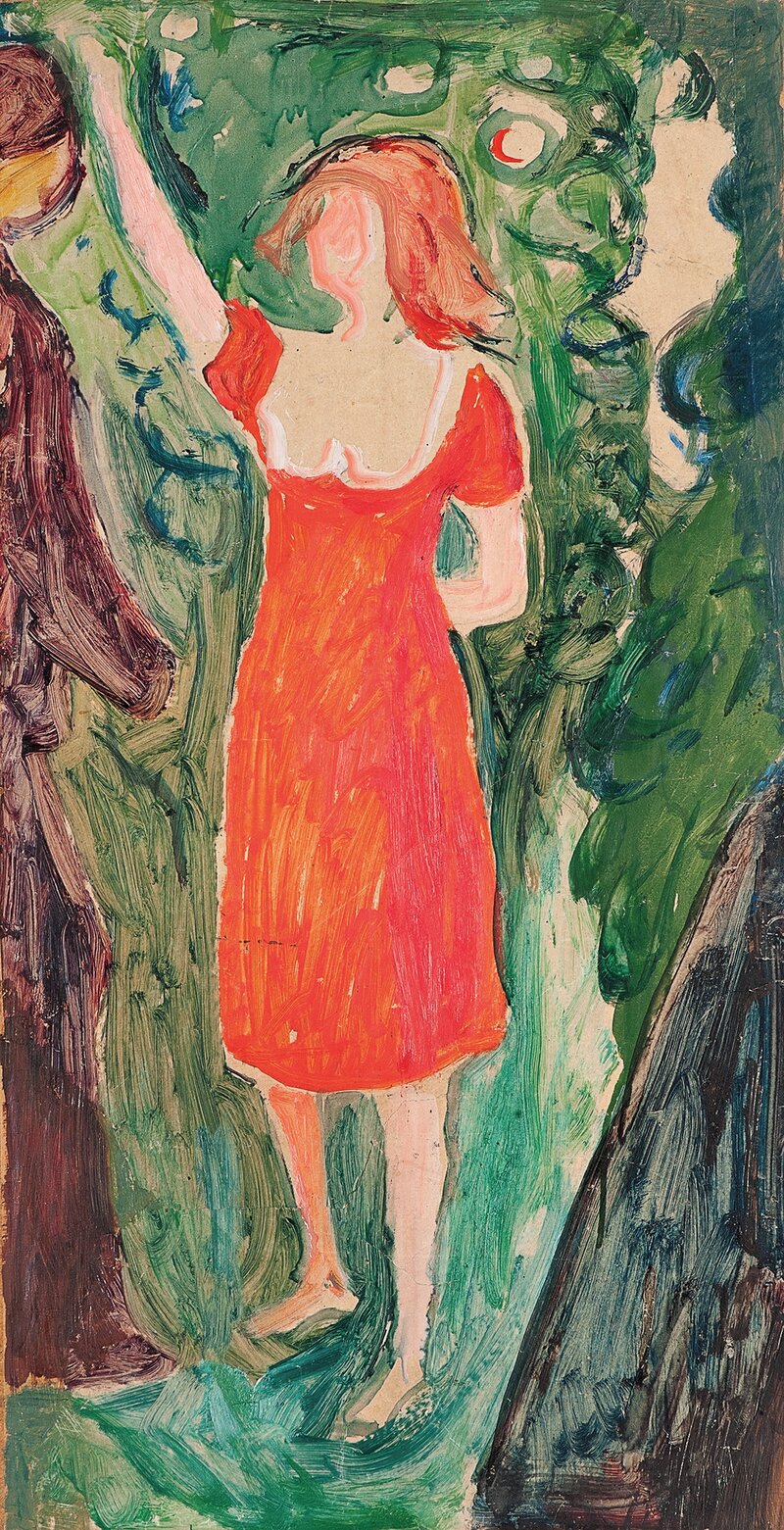 Edvard Munch often returned in his later artistic career, to central motifs from the 1880s and 1890s. This is also the case with this picture, which belongs to the theme Jealousy.

The first painting entitled Jealousy is from 1895 (Woll 379). The woman’s dress is open in front. In the man’s jealous mind, she stands naked before his rival. The woman stretches her right arm up to an apple in the fruit-tree behind her. With blushing cheeks she seems to stretch her young, beautiful body, to look her best. The subject can be interpreted in other ways, as a symbolic gesture which Munch lets her do, as Eggum writes:

Edvard Munch exhibited at Blomqvist in October in 1895. Prior to this, during a summer spent at Åsgårdstrand, he had created two new crucial motifs for his “Love” series, both modern paraphrases on Old Testament themes, «Ashes», which Munch originally called «Adam and Eve after the Fall», and «Jealousy», a new version of the jealousy motif, also referring to the Fall of Man. In the latter the man in the foreground, who in boundless despair sees before his inward eye the scene in the background, depicting Adam and Eve beneath the apple-tree, has been given the features of the author Przybyszewski. As in the case of “Madonna”, though still more ironically, these new motifs are given a pseudoreligious character. “Jealousy” can also be interpreted as a symbolical portrait of the author Stanislaw Przybyszewski who used his own jealousy as the material for his novels – satanic and suffering at one and the same time. Eggum, p. 135.

Jealousy is also one of the motifs Munch includes in his Frieze of Life. He talked himself about the frieze as “Life under the trees”. Pettersen, p. 139.

In the early versions the woman is rendered with an open dress, while in later versions it varies whether she is dressed or not. This painting is actually the only one where the woman has the same posture as in the earliest version from 1895, but is dressed, though with a very deep décolleté. This painting is made earlier than the version from 1933-35, (Woll 1720), where the woman again is portrayed with an open dress in the original posture. In that painting it seems as though he has worked on the middle part of the image. There is a vertical marking both to the right and the left of the woman. (In addition there is a marking, as a frame, around the head to the right, where Munch again, it seems, has used the traits of Stanislaw Przybyszewski). Inside the marking on either side of the woman, it seems as though Munch has added more colour. The section which emerges in the picture corresponds perfectly to the painting we have for Sale, Woll 1645.

The most significant parts of the picture is present also in this picture, and just enough so that one as a viewer gets the point, and especially, of course, if one knows Munch’s original composition. One just sees the man whom the woman talks to, to the left, and one sees the jealous man’s a little stooped shoulder just to the right in the picture. The center of attention is the woman in the red dress. The red colour resembles the colour in Jealousy, Woll 1720, they are both orange-red. In Munch’s original version the colour of the dress is a deeper red, more like the colour of blood.

Woll writes about this picture:

This work cannot be dated with any certainty. It looks as though it may have been a fragment from a version of “Jealousy”. The type of paper used, and the powerful colouring, suggest it may have been produced towards the end of the 1920s. Woll 2009, p. 1484.

An illustration of Woll 1720, Jealousy, shows the part with the woman in the middle which Munch seems to have worked on in particular. The picture is oil on canvas and is 78 by 117 cm. Woll 1720 was painted after Munch had seen an exhibition of modern German art in 1932 in Oslo, which he initiated himself. In his reworkings of his motifs from his youth in Åsgårdstrand, he could make use of fresh experiences from what he had seen. As Eggum writes:

Here he could view paintings executed with a blaze of colour and of almost vulgar intensity that clearly fascinated him. In particular the latest work of Schmidt-Rottluff appears to have found an echo in Munch’s mind, as we can see, for example, in his very latest version of «Jealousy» (Woll 1720), where the colours sparkle and the light is greatly intensified. Eggum, p. 274.