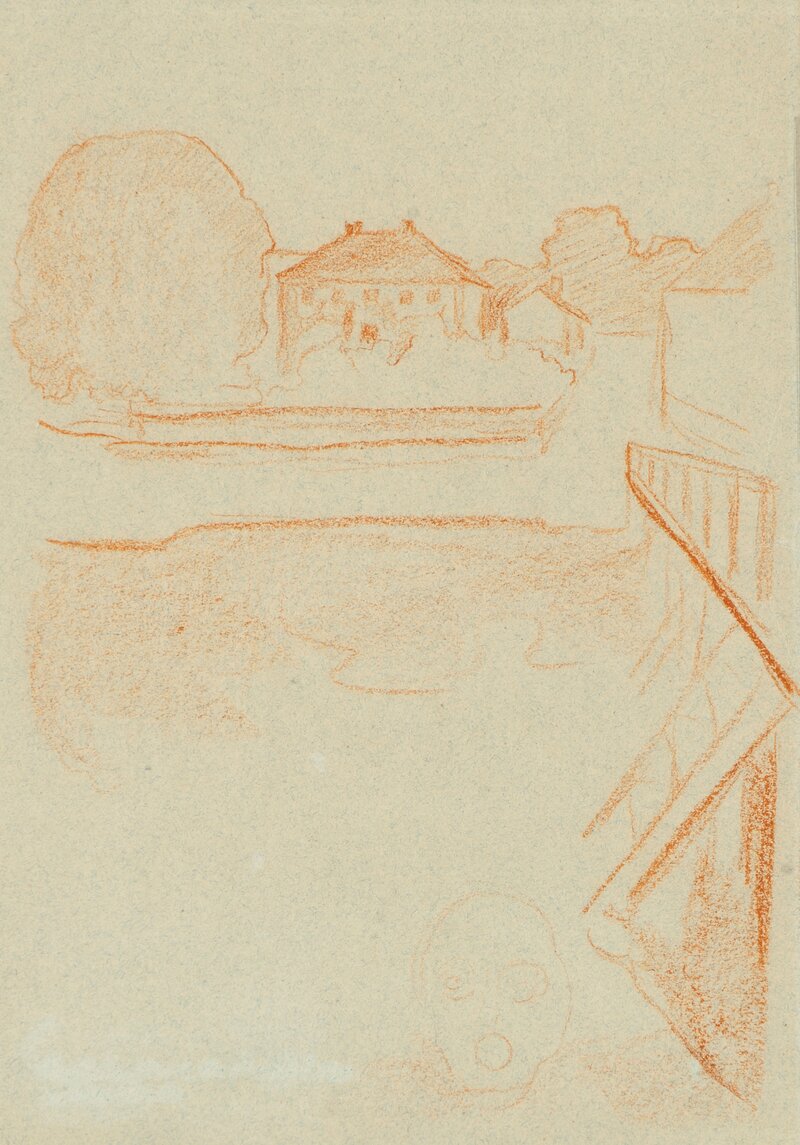 Registered by the Munch Museum with a Certificate of Registration of 1.9.1975. There it is noted that a former owner of the drawing probably wrote what has later been erased lower left. It shall have said: "Studie til "Huset ved stranden" - 1905 / av Edv. Munch" (Study for "The House on the Beach" - 1905 / by Edv. Munch).

Registered in the coming oeuvre-catalogue on Munch's Drawings which is to be published by the Munch Museum in the near future, with the number PE.T.00225. The sheet is from sketchbook number PE.T.00505.

In Edvard Munch’s generous gift to Oslo was also bequeathed around 4.500 drawings, which today constitutes part of the collections of The Munch Museum. In his book, published to the exhibition “Munch – Drawings”, curated by the author in Musée d’Ixelles in Brussels, shown 19.02.-16.05.2004 and presented at The Munch Museum 21.10.2004-16.01.2005, Magne Bruteig lifts the lid of this treasure chest.
His rendering of Munch as a black-and-white artist can also be transferred to this drawing, which is in private possession:

Though diverse, most of the drawings have one thing in common; they are informal, impulsive, relaxed. If it is really true that Munch never regarded the drawings as finished, independent works of art, this meant that he could to a much greater extent be himself in the drawings. They were not intended to be presented to a critical public; he did not need to prove anything. And it was Munch’s strength that he managed to retain the impulsive, the “unfinished” quality in his paintings too, a strength that was actually seen as a major defect by his contemporaries. Even today, one can catch oneself thinking that Munch was the genius who, in the heated inspiration of the moment, launched himself onto the canvas and finished the picture then and there. The drawings show with the utmost clarity that that was not the case. This certainly does not mean that he was uninvolved emotionally in the actual process of painting or printmaking. There is ample confirmation that he was. Yet by that stage his work had already been thoroughly prepared in advance, in head, heart and hand. Bruteig, p. 14-15.

In multiple pictures Edvard Munch painted motifs from his many summers in Åsgårdstrand with the Kiøsterud House in the background. In this study there is a face in the foreground seen "en face", with open mouth as in a scream. It is hard to find a painting with the excact similar subject-matter, but elements can be traced in some pictures, and in other paintings and drawings for that matter. However, in some paintings which comprises the Kiøsterud House and the bridge, there sometimes emerge a figur turned towards us, the viewers, but there doesn't seem to be any trace of despair, like in a scream, in any of their faces. In two of the paintings of The Girls on the Bridge, Munch turns one of the girls towards us. In this particular one the girl seems completely cool, Woll 484, in the other from 1905, Woll 639, the face is sketchely painted, her frame of mind is impossile to detect. However, he has also painted several versions of The Women on the Bridge, and in Woll 541, from 1902, one of the women is turned towards the viewer, with an open mouth. She seems to smile or talk, there doesn't seem to be any trace of despair in her face. In Woll 604 from 1904 there is a group of women on the bridge and one of them is turned towards us, with a somewhat undefineable expression on her face. Her face is green which suggests another mood than despair, rather envy. In some of the pictures with this motif there are also men involved, and one might think that the face in dispear is most likely the face of a man. In any way, this drawing shows how Munch worked on his ideas time and time again.