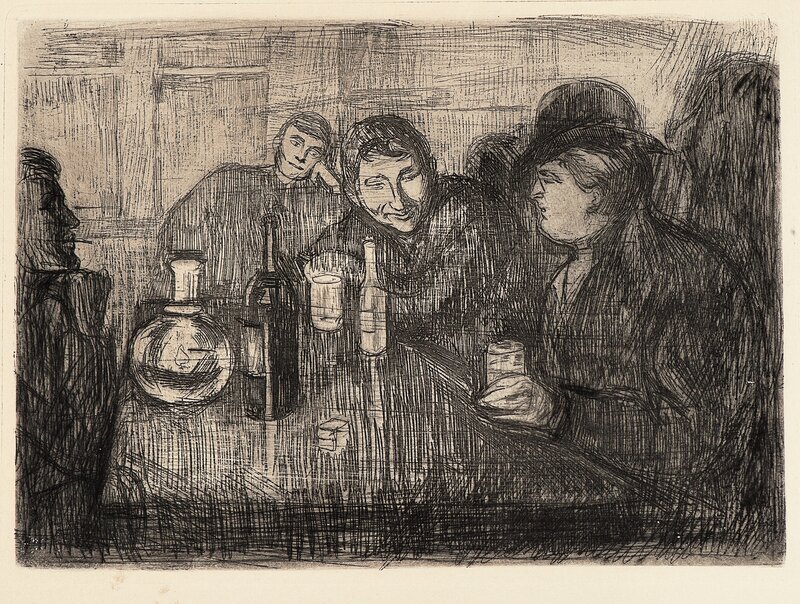 The figures in the picture are probably a student named Holmsen (with the hat), the Norwegian writer Axel Maurer (1866-1925), and Munch himself in profile on the far left. Woll, p. 48.

The term “Kristiania Bohemians” was probably used for the first time in 1883 in Hans Jæger’s play «Olga», in which it designates «Herman Eek and his friends». Eek is Jæger’s pseudonym for himself. He had become famous in the city for three public speeches on prostitution in 1882. The Bohemian circle surrounding Jæger – ostracised demagogue, seducer of the young, apostle of immorality – can be dated from spring 1882 until its disintegration towards the end of the decade. …
For Munch, Hans Jæger was undoubtedly the most important person in the Bohemian circle. They had much in common personally, most of all a very serious approach to life, a dislike of frivolity and superficial social life.

Munch collected subject matter and experiences from the life of the cultural avant-garde in the small provincial capital. His own and others’ semi-private café and studio life provided him with many of his best motifs during these years. He lived his life in this childless, unconventional urban world. In his choice of themes, Munch calls attention to the new, modern, secular, discordant, sexualised individual, with his jealousy, longing, emptiness, anxiety, doubt and desire. …
A few years later the Bohemian circle surrounding Jæger became socially, intellectually, and politically bankrupt as a result of intrigues, emigration, poverty, imprisonment, death, and suicide, and from its ashes arose another meaning of Bohemian, which has prevailed to this day – the Bohemian as an adaptable, light-hearted person, who has chosen his own, unconventional way of life and enjoys it to the full. Fosli 2013, p. 95-105.