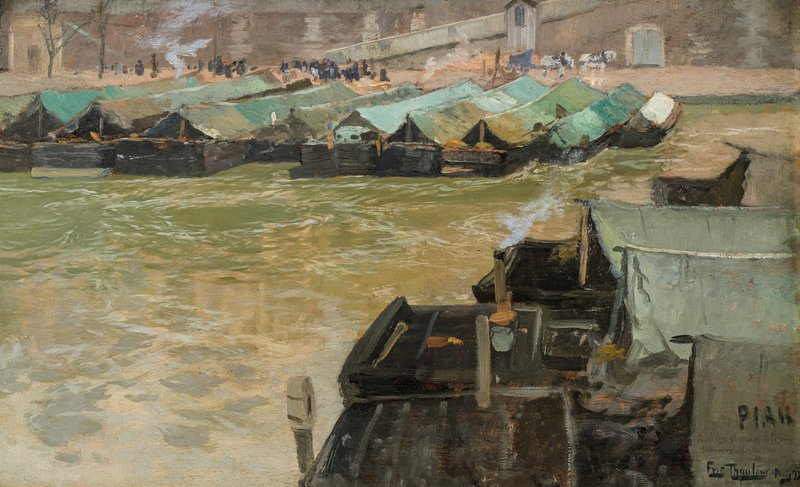 Annotated with different titles on verso of the board, in German: "Boote auf der Seine" and in English: "Apple Barges on the Seine, Paris".

Thanks to mag.art. Vidar Poulsson for information about the painting.


There are two versions of this motif, painted in the winter of 1892-93 in Paris. Alexandra Thaulow was taking care of the paintings from 1910 and onwards. The two are quite similar to one another and probably with the same measurements. The other one was photographed by Væring, (see www.vaering.no) perhaps with the same frame as this version. It lacks the pole for fastening ropes in the lower middle part of the painting.

The place depicted is «Le Marché aux Pommes" (The Apple Market), which was a stop on the route for the boats on the river Seine. The barges are moored by Île Saint Louis.

This painting was at an auction initiated by Alexandra Thaulow in New York, American Art Association, 1928 no. 65, with the title "Apple Barges on the Seine", with a description and with the information that it had been exhibited at Emil Richter Galleries, Dresden and also at Panama Pacific International Exposition, San Francisco, 1915, cat.no. 154.