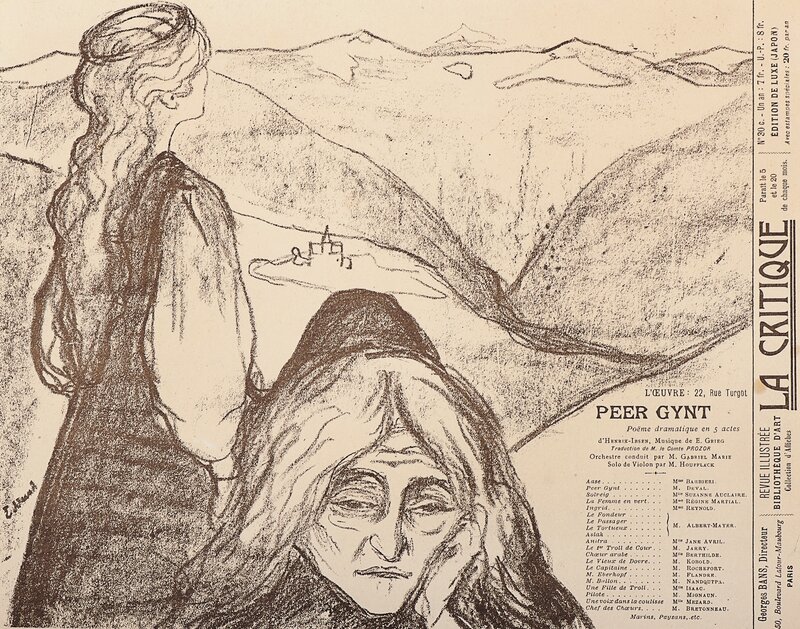 Munch???s first Ibsen portrait was a lithograph, a theatre poster for Lugné-Poë???s performance of John Gabriel Borkman at the Théatre de l???Oeuvre in Paris in 1897.
At that time, the actor and theatre director Aurélien Lugné-Poë (???the great Scandinavian???) made a considerable effort to present the Nordic drama to his compatriots, most importantly Ibsen, who had had Brand and Peer Gynt performed in Paris, as well as a series of his contemporary dramas. However, Ibsen was not quite satisfied. He thought Lugné-Poë incorporated too much symbolism and mystical lighting in the performances. To mollify the master, Lugné-Poë hired Norwegian painters: Munch was commissioned to produce the posters for both Peer Gynt (1896) and Borkman (1897), and the stage sets were painted by Frits Thaulow and Jens Wang, respectively.
Munch???s first Ibsen assignment thus became the poster for Peer Gynt. P. 132.