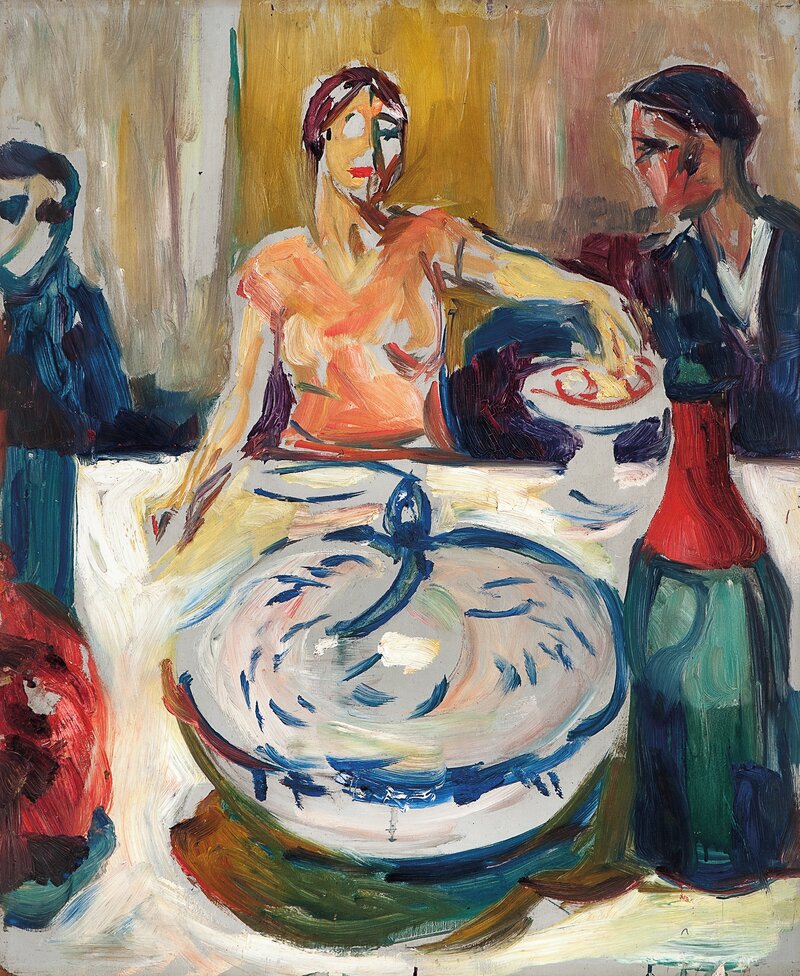 
Comment at cat.no. 1530 in Woll:
Painted on a mahogany panel with the manufacturer???s stamp of Le Franc.
It is natural to relate this to other versions of ???The Wedding of the Bohemian??? which Munch worked on during the period 1925-26, although the support might suggest a somewhat later date for this version. See also the discussion at cat.no. 1526. Woll 2009, p. 1399.

At cat.no. 1526, The Wedding of the Bohemian, one finds the same two sentences as above about the picture being painted on a panel from Le Franc, and the relation to other pictures with the same title, but that the support suggests a later date than 1925-26. In addition Woll says:
This painting cannot be dated with any certainty. The panel is of a type Munch used for both paintings and woodcuts in the years around 1930.
See also the discussion at cat.no. 1524. Woll 2009, p. 1395.

We have now moved backwards in Woll???s cat.nos. from the painting we have for Sale, cat.no. 1530, to the painting that is regarded as the main work of this theme from this time with the same title The Wedding of the Bohemian , cat.no. 1523. That one is painted on canvas and measures 134,5x178,5 cm. All these paintings, and in addition others painted at the same time which belongs to the same series, like: The Death of the Bohemian (cat.no. 1527), Oslo Bohemians (cat.nos. 1528, 1529), Self-Portrait at the Wedding Table (cat.nos. 1531, 1532) and Birgit Prestøe, Portrait Study (cat.no. 1533), are in the possession of the Munch-museet.
It is only this painting we have for Sale, which is in private possession.

Arne Eggum writes about the main work, the large painting, which was cat.no. 61 in 1998:
His whole life Munch was absorbed with himself as a model in his own art, both in traditional self-portraits, where he confronts himself with ruthless honesty, but also in diverse subjects where he acts as model with reference to his own experiences and his own life, and where the transition from self-portrait to model at times become unclear. ???
In ???The Wedding of the Bohemian??? (cat.no. 61) and in the many drafts for this main work, we also find Munch???s own traits. It is, by the way, Birgit Prestøe, who sits at the end of the table and makes up the dominant figure of the painting. On the table tower prominently a tureen, a fruit-basket and an empty bottle of wine. It seems as though Munch has meant to express an underlying meaning, where the vertical shape of the bottle and the rounded shape of the tureen and the fruit-basket symbolize respectively the male and the female. The tabletop, which might remind one of a still-life by Cézanne, presses the wedding-guests backwards in the picture and adds to the tension that might give associations to Surrealism. The bride sits straight in a pale dress with darkly dressed, worshipping men at either side of her at the table, almost as a female Christ-figure with her apostles at the last supper. Eggum 1998, p. 15-16.

In the catalogue of 1988 Eggum treats the theme more thoroughly in chapter VIII under the second headline of the chapter: The Wedding of the Bohemian, but something must be added from the first headline as well: The Gothic Girl:
When Birgit Prestøe came to Munch as a model in 1924, she met a painter who, now sixty years of age, was in a concentrated, creative period in his life; art works poured from his hands. Internationally he was now accepted as one of the age???s central artists because of what he had accomplished in all epochs of his life. This was ascertained to the full at the large retrospective exhibition in Zürich in 1922. P. 140.

Under the headline: The Wedding of the Bohemian, Eggum writes about the large picture, which in the catalogue of 1988 was no. 366:
???The Wedding of the Bohemian??? is the most important figure-composition Munch created in the 1920s, and maybe the one most difficult to interpret. Jens Thiis as well as Pola Gauguin state in their biographies about the artist of 1933 the importance of this subject, and Kunsthaus Zürich tried to buy the painting right up to the World War 1940 when all contact between the artist and other parts of Europe was broken.
Pola Gauguin describes the main picture (cat. 366) as follows: ???The large painting with many figures is ??? not so clear, but right away one senses that there is tension in the room that must, sooner or later, be released. Apparently, they are all quite calm, save for the woman who seems to be nobly sulky, and one of the lovers; probably the one who thinks of himself as the strongest ??? he is furious. But one feels that something is going on from the different and lively expressions of the implicated persons.» ???
In ???The Wedding of the Bohemian??? it is Birgit Prestøe who sits at the end of the table and who with her shining figure constitutes a prominent form in the painting. The groom has without doubt the character of self-portrait and Birgit Prestøe???s lean figure and superior air lead the thoughts unstrained to Munch???s fiancé from the turn of the century, Tulla Larsen. If we follow the consequence of this interpretation, we might ask if not Munch yet again, as he did in his simultaneously written notes (among others in the play «The City of free Love???), describes his bohemian wedding to Tulla. He reproached, to be sure, Tulla for her alleged many lovers, something that was a contributing factor for Munch in Switzerland in the late summer of 1900 definitely to reject her many attempts of making him sign the wedding-papers. At the same time it might be tempting to think that Munch, in the spirit of Strindberg, played up to the feelings he wanted to make use of in his literary compositions. ???
Our knowledge about who the model is, gives us no clues as to what she is supposed to represent. Consciously, or unconsciously Munch might have let the relationship between artist and model, between the elderly man and the young woman, be the profound meaning of the artwork.
???The Wedding of the Bohemian??? is dominated by the almost Cézanne-inspired still-life that the enormous tabletop constitutes, seen in perspective. On the table stands, apart from some empty bottles, used glasses and some fruit-boles with apples, a distinctive baroque soup-tureen with a fascinating snaky finial. One asks oneself: What does the tureen hold? Has Munch wanted to express a symbolism where the bottles and the tureen symbolize the male and the female, and the apples and the snake add something to the scene from the Fall of Man? It seems natural to interpret the subject not only as an ended meal, but as the table of the Lord???s Supper in biblical renderings, as loaded with symbolism. P. 148-152.

This version that we are selling of the subject, is by Woll listed as the last one in this series of paintings with the theme ???The Wedding of the Bohemian???. It seems as if it???s the panel it???s painted on that has contributed to the dating a little later than the main work. However, it also seems as if Munch in this version has wanted to pursue and develop the pictorial idea, to give a somewhat different expression. In this version the groom, to the left of the woman, seems young and naive, neither worshipping nor gloomy. But the figure to the right of her in this version seems to have problems, he seems torn to pieces by jealousy. This version is the only one of the paintings where Munch lets the bride stretch out her left arm and with her fingers in the apple stand, specifically grip for an apple. It seems like a very distinct reference to Eve, who by letting herself be tempted by the snake to eat from the Tree of Knowledge, led the man and herself out of Paradise, and into a life of Sin.
In this painting the lidded tureen and the empty bottle stand as an impressive still-life, dominating prominently in the foreground. The two items are in this version pressed even further up into the foreground than in the other versions of the subject, unavoidable for the viewer to take notice of. With the skilled hand the artist now had, he was able, with ???sprezzatura???, and it seems, in pure pleasure of painting just with a few strokes, to give a precise impression of the items??? peculiarities. The tureen cannot have been made of anything but soft faience, which with its greyish-white glace gives a somewhat fat, shimmering look. The tureen is with its swirling, slightly faceted design, lively Rococo, the finial might be a flower bud or a spruce cone, but it has undeniably something ???snaky??? about it, with the few strokes Munch uses to characterize it. The wine bottle, likewise, cannot have been made of any other material than hard, dark-green glass. The bottle is obviously void, the light shining through the glass reveals it. Solely by placing these two items in the foreground, as symbols for male and female as Eggum says about the large picture, Munch displays tension between the genders.