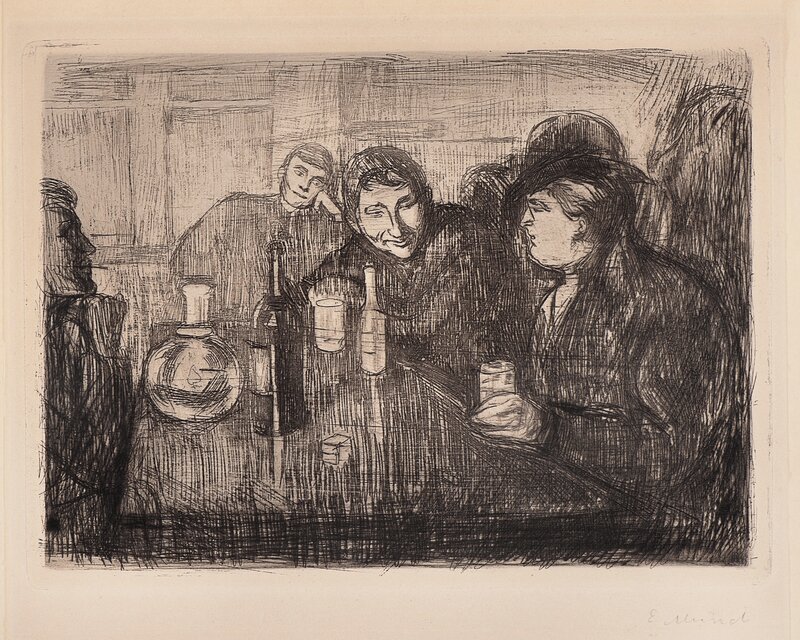 Edvard Munch was not part of ???the Kristiania-bohemians???, but he hung around many of the characters in this environment. It was not in the least here he met modern, intense, angst-ridden humans, who would make a distinct mark on his art. The bohemians as a general cultural phenomenon are characterized by a conscious anti-civil attitude and an uncivil lifestyle, where in particular distance is kept to the monogamous marriage and work for wages. The bohemian-culture therefore is necessarily linked to the growth of a civil culture in the city. ???
The expression ???Kristiania-bohemians??? was probably used for the first time in 1883 by Hans Jæger in a written piece «Olga», and mentions «Herman Eek and his friends». Eek is Jæger???s pseudonym for himself. He had become infamous in the city through three public speeches about prostitution in 1882. The bohemian circle around Jæger ??? the outcast public speaker, the seducer of the youth, the apostle of immorality ??? is datable from the spring of 1882 until its dissolution at the end of the decade. ???
Munch???s path into the radical environment in the capital came through his status as a student of art. This was what qualified to be taken into the environment, that???s how he could take part in parties, conversations in cafés and promenades, even though he was shy and uncertain. ???
For Munch Hans Jæger was without doubt the most important individual in the circle of bohemians. They had a lot in common personally, a very serious approach to life, an aversion to frivolity and superficial social life. ??? Jæger meant that the civil society ruined man by refusing the pleasures of sexuality. ??? Jæger thought???that???the good life would emerge on the principle of free love. ???
Jæger used the bohemian concept for a society-rebellious, morbid, doomed youth. He dreamt of a large bohemian movement which would set the repressed human free. 1886 he reached the height of his career ??? at that time the whole of Kristiania was turned topsy-turvy, everybody discussed his banned book ???From the Kristiania-bohemians???, Jæger???s theories and questions about freedom of speech. It seemed as though a whole social movement was in progress, but the bohemian movement was only a creation of the media. Most of those who supported Jæger in 1886, only supported his right to express himself, not the content of his expressions. ???
Munch collected motifs and experiences from the cultural avant-garde???s way of life in the small provincial capital. His own and others half-private café- and studio-life gave him many of his best subjects during these years. He lives his life in this childless, uncivil urban environment. Thematically Munch points at the new, modern, secular, disharmonious, sexualized human, with its jealousy, longing, emptiness, angst, despair, desire. ???
The circle of bohemians around Jæger went bust some years later socially, intellectually and politically because of intrigues, emigration, poverty, jail, deaths and suicides, and from the ashes rose another understanding of the bohemian which has kept until today ??? with the bohemian as an adaptable, frivolous person who makes the most of life, with an uncivil lifestyle of own choice. Fosli 2013, p. 95-105.