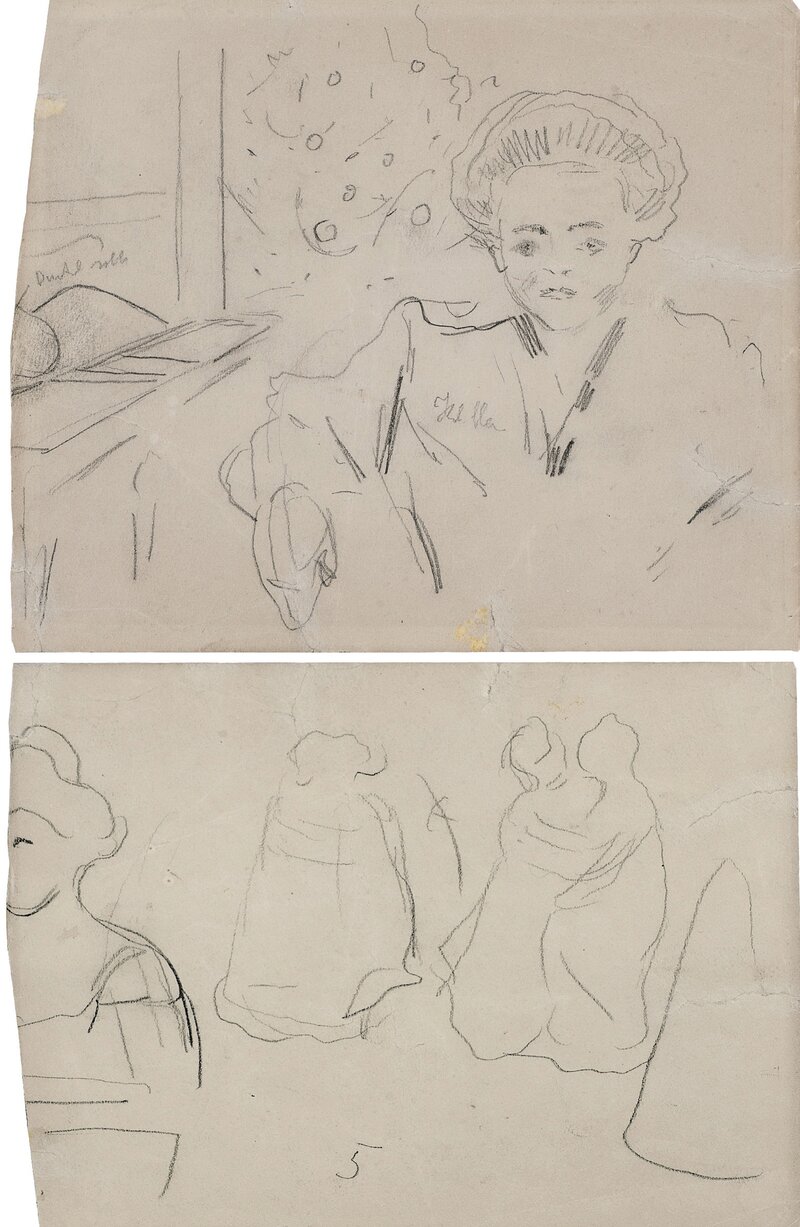 158x180-188 mm
Unsigned
Drawn in pencil on both sides of the sheet, which probably originates from a schetch-book.
Brothel Scene: Annotated in pencil probably by the artist lower middle: “5”.
Christmas in Brothel: Annotated by the artist, likewise in pencil, with indications of colour-areas to the left: “dunkel roth” (dark red) and on the woman’s right shoulder/breast: “Hel blau” (Light blue).
Ref. Woll 573 Brothel Scene 1903 and Woll 575 Christmas in Brothel 1903-04.
PROVENANCE: Given to Edvard Munch’s dentist, Knut Erik Ek, sometime after 1940.

In Edvard Munch’s generous gift to Oslo was also bequeathed around 4.500 drawings, which today constitutes part of the collections of The Munch Museum. In his book, published to the exhibition “Munch – Drawings”, curated by the author in Musée d’Ixelles in Brussels, shown 19.02.-16.05.2004 and presented at The Munch Museum 21.10.2004-16.01.2005, Magne Bruteig lifts the lid of this treasure chest.

His rendering of Munch as a black-and-white artist can also be transferred to this drawing, which is in private possession:

Though diverse, most of the drawings have one thing in common; they are informal, impulsive, relaxed. If it is really true that Munch never regarded the drawings as finished, independent works of art, this meant that he could to a much greater extent be himself in the drawings. They were not intended to be presented to a critical public; he did not need to prove anything. And it was Munch’s strength that he managed to retain the impulsive, the “unfinished” quality in his paintings too, a strength that was actually seen as a major defect by his contemporaries. Even today, one can catch oneself thinking that Munch was the genius who, in the heated inspiration of the moment, launched himself onto the canvas and finished the picture then and there. The drawings show with the utmost clarity that that was not the case. This certainly does not mean that he was uninvolved emotionally in the actual process of painting or printmaking. There is ample confirmation that he was. Yet by that stage his work had already been thoroughly prepared in advance, in head, heart and hand. Bruteig, p. 14-15.