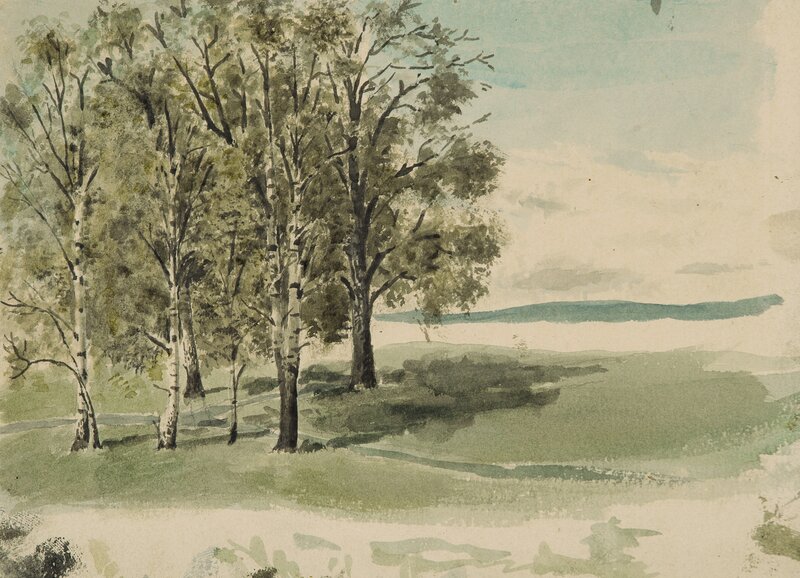 Registered by the Munch Museum 21.1.1984. A copy of the registration from 14.10.2016 is available, stating that it is impossible to say for sure if the annotation on verso is by the artist himself, but that the year "1879" probably is correct when it comes to dating the watercolour. The blue stamp is not mentioned by The Munch Museum.

Under the heading «By Grüner’s Garden» Marit Lande writes among other things:

The Munch family lived only for a few years in Thorvald Meyer’s Street 48. In 1877 they moved just a few blocks westward – into a newly built tenement in Foss’s Street 7.

The tenement in Foss’s Street 7 had two apartments on each floor. The Munch family rented one of the largest, with 3 rooms towards the street and bedrooms, kitchen and servant’s room towards the backyard. In front of the house there was a little garden, - the children had each a little plot where they could plant and seed. The street beyond was no more than a trodden path, in rainy weather it was almost impassable – you had to balance on narrow planks which were put over the worst mudpools. It was not until years later the street was properly built with a sidewalk. Then there was nothing else to hear but “the hammering of cobblestones and the clatter from carriages”, Laura complained.

From the apartment there was a beautiful view over Grüner’s Garden and Aker’s River. From the windows onto the street one could see on the west-bank of the river, Old Aker Church towering on the hill, and through the trees in Grüner’s Garden one could get a glimpse of the mighty dome of The Trinity Church.

Grüner’s Garden was a sight in springtime, with blossoming fruit-trees in abundance. The western winds carried the fragrance from trees and flowers to the whole of “Løkka”, the area, and down into the narrow backyards. Through the trees one could just see the overgrown remains of the beautiful park, with graveled walkways between the earlier well-tended lawns. Further into the garden there was a pond where geese and ducks lazily swam around. In the garden Grüner’s manorial house was situated with buildings also for the coachman, the servants and the gardener. There were stables for the carriage- and riding-horses, and the entire property was enclosed by a high fence. Captain Grüner himself was rarely seen in the area. S. 51-54. (Translated by GWPA).

Under the heading Daily life in the family Atle Næss mentions: