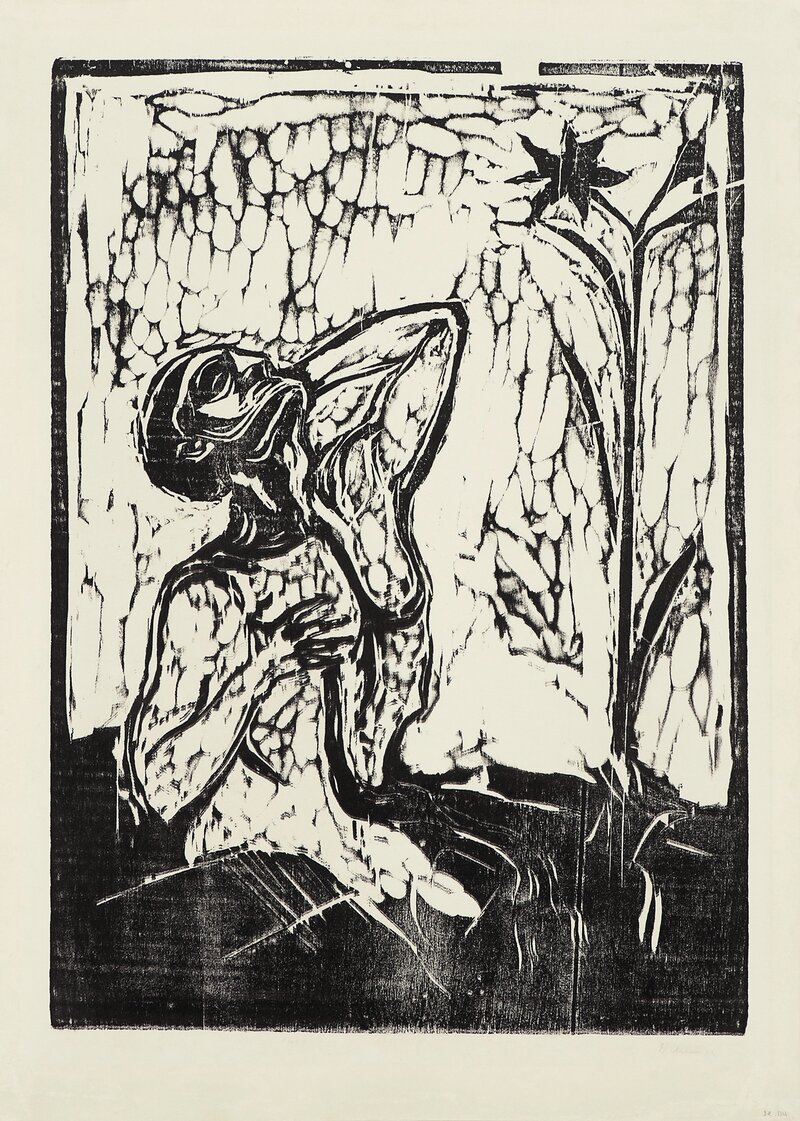 Under the heading Symbolic motifs Magne Bruteig writes among other things:

In the 1890s Munch felt the impact of the prevailing tendencies in contemporary art and merged them into his own personal formal language. Major contributors to this formal language were Synthetism and Symbolism. The simplification of forms in Synthetism, often with expressive and unifying contours are clearly reflected in Munch’s paintings, and perhaps especially in his woodcuts … .

Stylistically, Symbolism has few unifying features. The pictures of Gustave Moreau, Odilon Redon, Jan Toorop and Arnold Böcklin – to name just a few – are very different in formal terms. To find a common denominator, one must look at the content: a fascination with mysticism – and sometimes the occult and the perverse – and an attempt to reveal a deeper meaning behind the visible world. Myths, dreams and representations of the imagination become important ingredients.

Munch was a Symbolist, in that he sought to express a hidden reality through the visible. The concrete takes on the role of messenger, metaphor, symbol. Edward Lucie-Smith is one of many art historians to rank Munch among Symbolism’s most important artists:

“If we want to understand how Symbolism led towards Modernism, then it is to Munch’s work in the 1890s that we must look. During that decade, in particular, he had every claim to be called the most advanced artist of his time. Long before it was enunciated elsewhere, he embodied the doctrine that the modern artist puts himself personally at risk in his art – that in giving life to his creations, he necessarily risks his own.”

A central symbolic motif in Munch’s work is “Blossom of pain” (plate 51 (drawing of the motif Blossom of pain. ”Quickborn”, illustrated in Bruteig, p. 109). … . The artist should not portray inessentials, not shine with technical skill or “paint nice pictures to hang on drawing room walls”. “All art, literature like music must be produced by one’s heart’s blood … Art is one’s heart’s blood.” In this drawing, Munch further develops this quotation by having a flower – art – grow up from the blood of life. Art and life become one. But to achieve this, the artist must sacrifice the most precious thing he has. This drawing is the starting point for the cover page of the journal “Quickborn” (January 1899 issue), for which August Strindberg was responsible for all the text and Munch for the illustrations. Bruteig, p. 87-89.