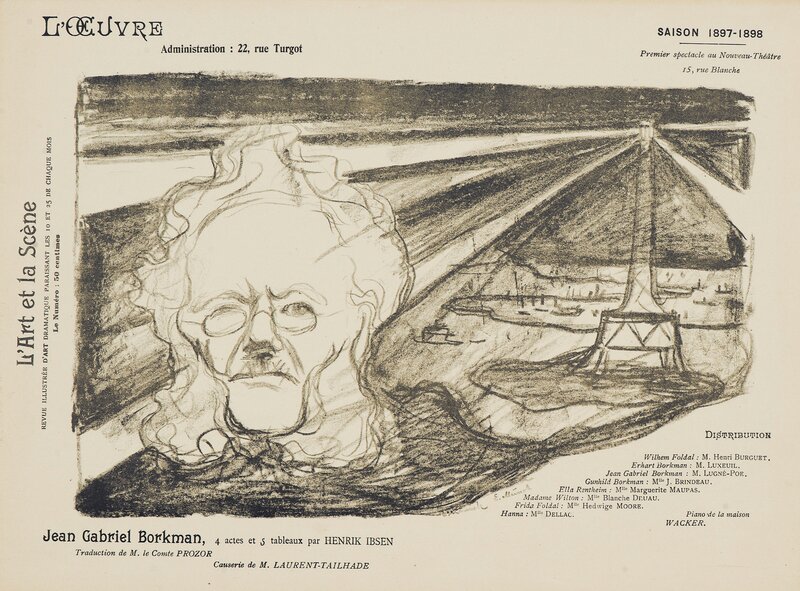 Designed as the programme for Lugné-Poë’s production of Ibsen’s drama "Jean Gabriel Borkman" at the Théâtre de l’Oeuvre in Paris in November 1897.

Henrik Ibsen was portrayed by many painters of his time. The image is always the same: A severe and sometimes fierce, dignified and buttoned-up man with a high forehead, sharp eyes and white hair framing a face with strong features. Erik Werenskiold’s charcoal drawing of a laughing Ibsen was the only exception, and serves as a reminder to later generations that the great dramatist was also a master of humour.

Edvard Munch’s portrayal of Ibsen (which, with certain variations, is consistent in all of his Ibsen portraits) incorporates elements of this familiar iconography, yet bears his own characteristic approach. Although we see a serious and introverted Ibsen, it is the mighty head that commands attention. Munch’s portraits reveal the clairvoyant Ibsen, who scrutinises our souls to see deeper and farther than all others.

Munch’s first Ibsen portrait was a lithograph, a theatre poster for Lugné-Poë’s performance of John Gabriel Borkman at the Théatre de l’Oeuvre in Paris in 1897.At that time, the actor and theatre director Aurélien Lugné-Poë (“the great Scandinavian”) made a considerable effort to present the Nordic drama to his compatriots, most importantly Ibsen, who had had Brand and Peer Gynt performed in Paris, as well as a series of his contemporary dramas. However, Ibsen was not quite satisfied. He thought Lugné-Poë incorporated too much symbolism and mystical lighting in the performances. To mollify the master, Lugné-Poë hired Norwegian painters: Munch was commissioned to produce the posters for both Peer Gynt (1896) and Borkman (1897), and the stage sets were painted by Frits Thaulow and Jens Wang, respectively.

The following year, the face of Ibsen himself was prominently figured in the Borkman poster, perhaps also suggesting that Borkman was, in Munch’s opinion, Ibsen’s alter ego. To the right of the face and projecting upwards from a quickly sketched coastal landscape, a tall lighthouse casts cones of light into dark space. The symbolism is simple, appropriate for a poster; Ibsen is the beacon who sheds light on the hidden regions of human existence – the great bearer of light in contemporary spiritual life. However, it is primarily the face that we see, and that sees us.
Lugné-Poë had met Ibsen at the Grand Café in 1894, while he was completing Little Eyolf: “His attitude at first seemed to be very correct and somewhat shy, his face clear in the high, white scarf… This man’s unusual gaze caught my interest. I have never been able to forget his eyes, and only the painter Edvard Munch has managed to reproduce them in a drawing. The one eye, halfway closed, seemed to consider and think, and the other observed (us) and was particularly full of life and warmth. It seemed to me that the undecided colour of his eyes shone with an unusual luminescence behind his glasses.”

…Munch had also seen what Lugné-Poë described, and knew intuitively that it represented something essential about Ibsen’s character: The one eye is wide, open and extroverted, considering the viewer while looking beyond him at the same time, the other eye is nearly closed in inner concentration. P. 132-133.