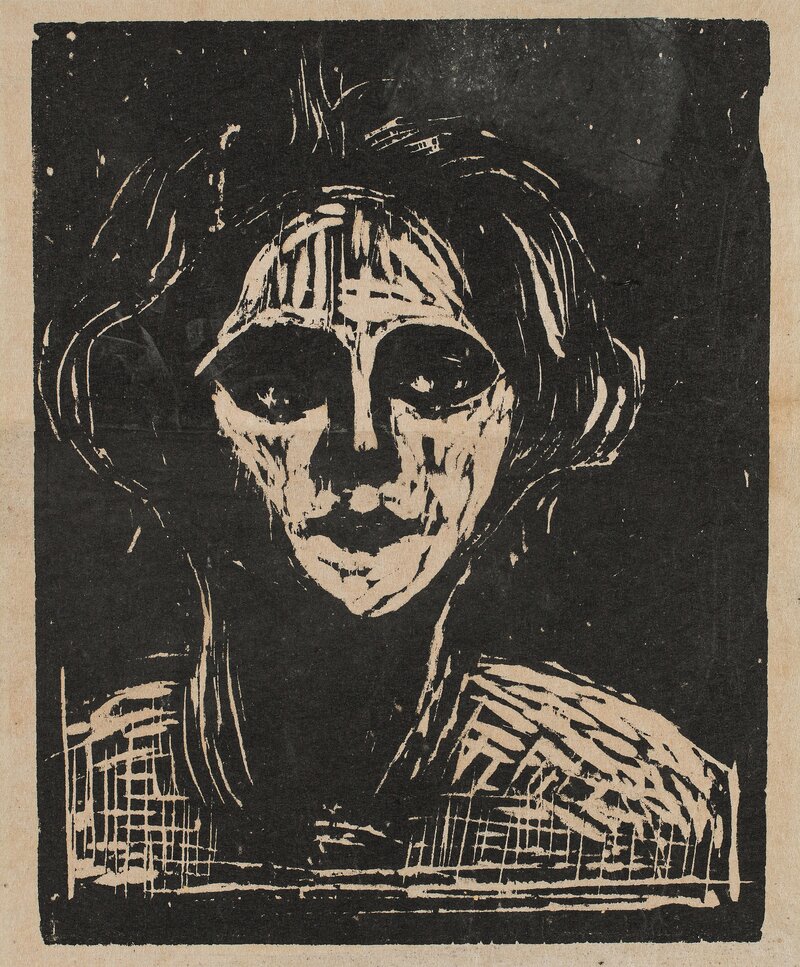 Under the heading The blossoming of printmaking Magne Bruteig writes among other things:

During the time that had elapsed from Edvard Munch's previous sojourn in France in 1891-92, the status and dissemination of graphic works had received a significant boost. ...

Alongside all this enthusiasm for colour (Toulouse-Lautrec/Chéret), some artists continued to work with traditional black-and-white prints. Within th field of woodcuts, Felix Vallotton (1865-1925) developed a distinctive style which saw him augementing the contrast between black and white areas, employing a minimum of tonal graduations ... . He abandoned the xylographic method's use of razor-sharp tools to carve into hard end-grain wood, instead favouring coarser tools and long-grain wood to achieve a pared-back mode of expression that emphasised the unique traits of the woodcut technique. When Munch arrived in Paris in 1896, Vallotton's woodcuts had become highly sought-after, a fact which undoubtedly helped pique Munch's curiosity about the potential inherent in the method.

Still, there is a certain element of control to Vallotton's woodcuts, an elegance and sophistication that might not have appealed directly to Munch's artistic temperament. The woodcuts of Paul Gauguin (1848-1903) were a different story altogether. In 1893-94, inspired by his first journey to Tahiti, Gauguin created the woodcut series "Noa Noa". He attacked the wooden blocks with tremendous energy and spontaneity, fusing raw power with a keen sense for the decorative in a fascinating, innovative way that udoubtedly made an impression on Munch. However, the question of whether the French artist directly inspired Munch to embark on woodcuts is rather more difficult to resolve. The "Noa Noa" series was done to serve as illustrations in Gauguin's book bearing the same name, but the volume was not published until long after his death. When Munch arrived in Paris, these woodcuts were not as easily accessible by the general public as Vallotton's graphic works. He would undoubtedly have seen them in the home of the composer William Molard (1862-1936), who, together with his Norwegian mother and Swedish wife, the sculptor Ida Ericson (1853-1927), was a pivotal figure in the Scandinavian scene. A few months previously, Gauguin had set out for Tahiti again, but before embarking on his journey he left behind many of his woodcuts - and perhaps some of the wooden blocks, too - with his friend and neighbour Molard. However, we cannot know for sure whether Munch visited Molard before or after creating his own first woodcuts.

Be that as it may, we do not need to look for a single, particular impulse behind Munch's newfound interest in woodcuts, prompting him to carve his first wooden blocks in the autumn of 1896. Unlike Berlin, Paris had a thriving scene for fine-art woodcuts: the book "The Artistic Revival of the Woodcut in France 1850-1900" enumerates more than thirty artists working with woodcuts in the 1890s. In addition to the two aforementioned artists, they include famous figures such as Edouard Manet, Emile Bernard, Maurice Denis, Edouard Vuillard and Aristide Maillol.

All this is to say that it is no wonder that Munch takes up woodcuts upon settling in Paris; on the contrary, it is an entirely natural stage of his artistic development. ...

One should perhaps be wary of attaching too much psychological impact and significance to the varous techniques (the graphic techniques of etching, lithography and woodcuts). Nevertheless, it is tempting to toy with the idea that the different physical realities surrounding the creation of, for example, lithographs and woodcuts also affect the mental aspects involved - and, hence, the artistic impulse. The litho crayon or brush gliding easily, almost frictionlessly across the smooth surface of the lithographic stone may speak less powerfully to the artist's strong feelings than the gouge, which must be pressed and pushed deep into the wood. The physical aspect of the process itself can provide an outlet for mental energy and remains embedded in the wood as visible traces of force expended. P. 68-71.