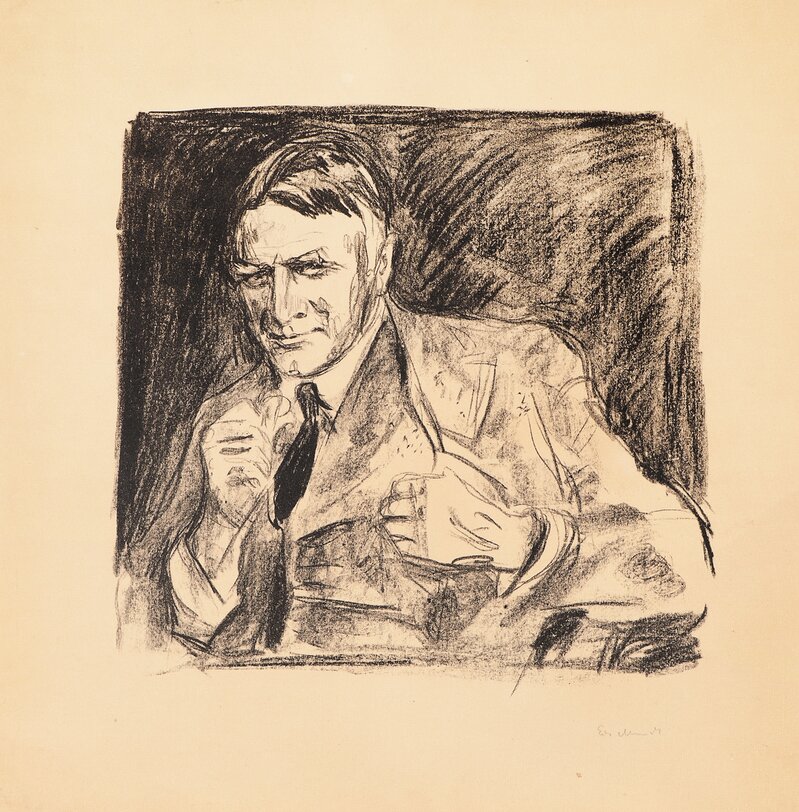 In Woll 2012 it???s noted that Bull was Munch???s friend from childhood. In letters amongst others to his sister, Inger, from approximately 1929 to 1941, Edvard Munch talks about the architect Henrik Bull as his old friend. (See MM N 1297 etc.). Munch gave him the task of designing the enlargement of the Winter Studio at Ekely, which was erected in 1929. It was probably in connection to that assignment Munch drew this handsome portrait of Bull.

As is stated in the Norwegian Biographical Encyclopaedia, Henrik Bull (1864-1953) was around 1900 the country???s most prominent architect. He is especially well-known for designing the National Theatre (1891-1899), The Historical Museum (1897-1902) and the Government Building (now the Ministry of Finance, Aker???s street 40), the southern wing of a large, unfinished plan (1899-1906). He also designed private villas, among others the Villa Otium (Villa well-deserved leisure), Nobel???s street 28 (1909-1911), which today is the Residence of the American Ambassador. From 1912 until he retired in 1934 he was director at the State???s School for Crafts and Applied Arts, and was important for artists and craftsmen in his tutorial years.

Edvard Munch has portrayed Henrik Bull as a dynamic individual. In the lithograph he is drawn in a half-figure pose, sitting turned to the left. The head is slightly bent, but his eyes look sharply and directly at the viewer under bushy eyebrows. The pose, with the underarms raised and both hands with a strong grip on either lapel conveys an impression of movement. Bull???s left elbow rests on an arm, but the clenched fists do not testify to rest and gives a telling contrast. The hands seem to jut out into space and contribute to the dynamic expression. He seems to be ready for battle, a battle he has every intension of winning!

On an impression formerly owned by Henrik Bull, there is an inscription:

???Leaning back in a (his) chaiselongue he gave his opponent a friendly but very cunning look. He raised his revolver, sighted carefully and shot him down???. Woll 2012, p. 423.