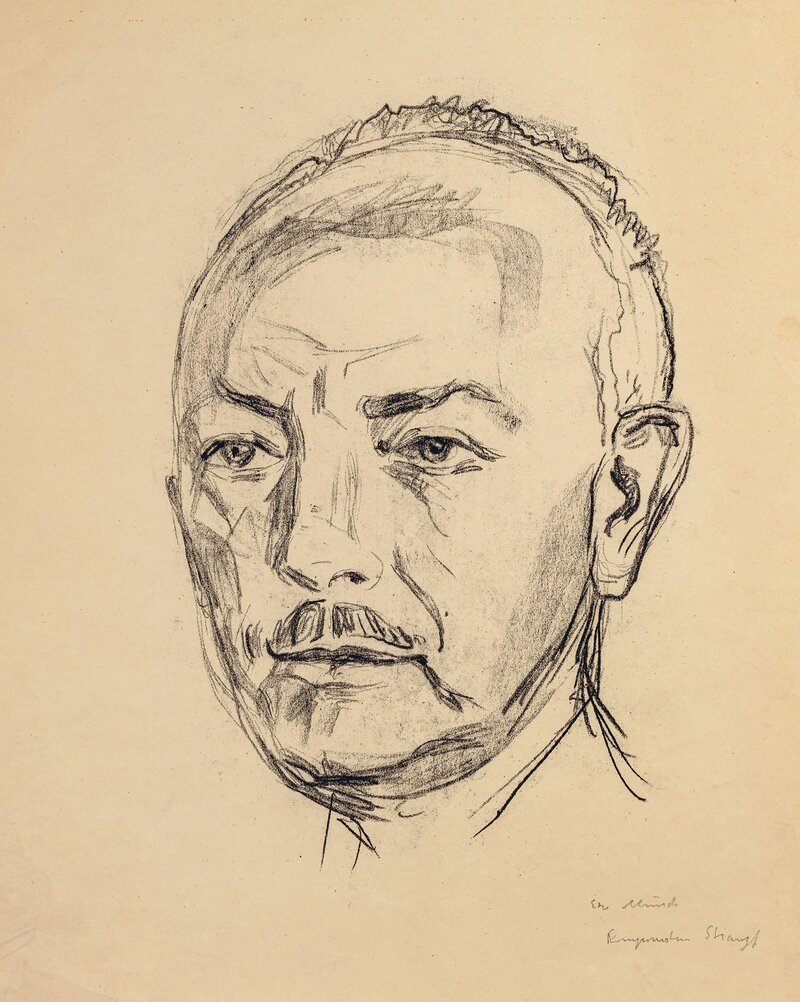 Annotated in pencil, by the Artist, lower right: "Komponisten Strauss" (The Composer Strauss)

The Munch-museet on Edvard Munch’s meeting with Richard Strauss, www.munchmuseet.no.

Wikipedia.no about the composer Richard Strauss.

Geir Rakvaag: «Midt i musikken (In the middle of music)», Tine Thing Helseth’s Festival, Tine@Munch, in the Munch-museet 7-9 June 2013 in the year of the 150th anniversary of the birth of Edvard Munch, Dagsavisen, 4 June 2013.

Richard Strauss (1864-1949) was a German composer during the Late Romantic and Early Modern Era. He had no relationship to the Strauss-composers in Vienna. Strauss’s music is for the most part typically Romantic. It is in principle tonal and with a pronounced melodic structure. It is however, also characterized by the composer’s specific expressionistic tonal language, with advanced harmonies and innovative use of dissonance. It seems as if Munch’s idiom with its expressionistic tendencies would appeal to Strauss, and it did.

In September 1916 the opening of the University Festival Hall with Munch’s paintings was a fact. Now the Festival Hall could be used for lectures and concerts in its new and shining glory. The impresario Rudolf (Rulle) Rasmussen, who knew Munch, worked to get Richard Strauss to Oslo to hold a concert in the Festival Hall, and he managed, even though it was bitterly cold in March of 1917. Strauss came to accompany on grand piano to his songs, the German-Romanian tenor Rudolf Steiner. The 17 and 18 March 1917 the concerts, or the romance evenings, were held. Strauss had immediately after having entered the Hall become very impressed by Munch's paintings on all walls, he exclaimed: «Aber Gott im Himmel! Was ist das für herrliche Gemälde!» (But God in Heaven! What are they, these wonderful pictures!) He put on his pince-nez and seemed almost to concentrate more on the paintings than on the concert.

Strauss was completely enchanted by Munch’s paintings, he became bereft of speech and could hardly take his eyes from them, even while playing. S. 8.

Richard Strauss held Munch to be one of the world’s most important painters, and he mentioned Munch in the same breath as Rembrandt.

Edvard Munch may have known many composers, and one of the composers he certainly met was Richard Strauss. Strauss came to Oslo, saw “The Sun” in the Festival Hall and exclaimed: “that’s how I want my music to be”. Rakvaag.

The day after, 19 March, the impresario Rulle Rasmussen got Munch to come, so that he could meet Strauss. That day, Munch drew a portrait of him. It is this portrait Munch had made as a lithograph.